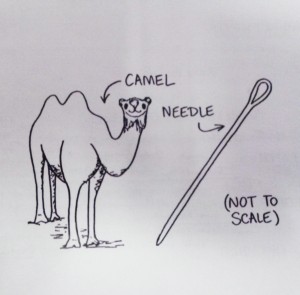 What does it mean to be rich? To have power and influence? A large bank account? A big house? Lots of stuff? Many friends? Good health? Many would say it relates to money.

I’m sure I’m not the first to observe that if you want to get Americans to sit up and pay attention, hit them in their pocketbook! We are highly motivated by what adds to or takes away from our bank accounts. But really, what can you do with a bunch of paper and metal?

The Meaning of Money

Money is pregnant with meaning. For some it represents status, power, and control. For others, money offers options, fun toys and pleasure. For many, like me, it represents security.

Material wealth is fraught with challenges. For one thing, it is easy to over identify with our things. Am I more important if I am wealthy? Do I have the right to power and control because of my socioeconomic status?

I am not saying this because I am in need, for I have learned to be content whatever the circumstances.12 I know what it is to be in need, and I know what it is to have plenty. I have learned the secret of being content in any and every situation, whether well fed or hungry, whether living in plenty or in want. 13 I can do all this through him who gives me strength. Philippians 4:11-13

Like the Apostle Paul, I have been on both sides of this equation. I have lived with plenty and I have been poor. We lived in the inner city in Baltimore where convicts ran through our back yard, and tires were slashed, drug deals were brokered, neighbors meted out vigilante justice, tired of the inability of the police to get things under control.

I remember walking wet laundry up a hill to my friend’s house to borrow her dryer. Otherwise, I hung clothes on a line in the apartment. I also remember having only $10-20 to spend on Christmas our first year there. Often stressed during those years, I worried about how we would make ends meet. Our situation was temporary, however, and that made all the difference. Some people never hope to push past the glass ceiling that holds them in poverty.

When the Spending Ends

During the years when things weren’t so lean, I truly appreciated not being afraid because I knew there would always be enough to pay the bills. Money created a heavier layer of responsibilities but it also created opportunities and offered many pleasant experiences. But then my life turned upside down.

Money, you’ve got lots of friends
Crowdin’ ’round the door
When you’re gone and spending ends
They don’t come ’round no more

Like a Billy Holiday tune…everything changed when the spending ended. As I learned over time to adjust to a new identity and standard of living, I found peace again. God provided enough, and with Paul, I learned to be content…most of the time!

There is a popular assumption that the more money we have, the happier we’ll be. Harvard Psychology professor, Daniel Gilbert, in Stumbling on Happiness, says, “economists and psychologists have spent decades studying the relation between wealth and happiness, and they have generally concluded that wealth increases human happiness when it lifts people out of abject poverty and into the middle class but that it does little to increase happiness thereafter…it hurts to be hungry, cold, sick, tired, and scared, but once you’ve bought your way out of these burdens, the rest of your money is an increasingly useless pile of paper.”

When Dreams Fail to Deliver

Another challenge is that wealth can mesmerize us, pulling us away from what truly matters. We become what we give our attention to….Gollum, in the Lord of the Rings trilogy, turned from a hobbit into a creepy distortion of what he used to be because he couldn’t get his focus off his “precious” evil ring. It became the thing that gave his life meaning. We have to ask ourselves, what gives our lives meaning? Is it our stuff? How much we own?

Midas was a king who was given the power to turn everything he touched into gold, according to the Greek myth. He was so mesmerized by the thought of limitless wealth that he failed to consider his “gift” from the gods would turn his food, his wine, and even his beloved daughter into cold, hard metal the moment he touched them! His obsession left him hungry, lonely, and heart-broken. The dream failed to deliver the happiness he expected.

Jesus had some challenging things to say about wealth. Much like the Midas tale, he warned us to be careful about the degree to which we attach to money and our possessions.  After chatting with the rich young ruler, Jesus was sad and said,

Jesus was not saying it’s wrong to be rich.  But money can tempt us to mix up our priorities, to forget that true happiness is a deeply spiritual thing.

Tevya, from Fiddler on the Roof, facetiously reasoned with God, “It’s no sin to be poor, but it’s no great honor, either!” It’s also no sin to be rich, but it can complicate things.

Rich man, your pockets are full,

Money, its burns a hole in your soul,

Poor man, with the humble heart,

You can be the place where the changes start.

The Power of Love  – Carolyn Arends

We need to be sure our money doesn’t burn a hole in our soul.