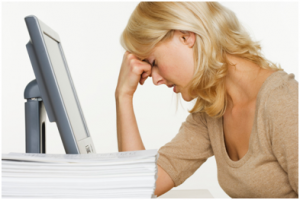 There’s a great scene in the movie 27 Dresses where Jane, the main character played by Katherine Heigl, publicly shames her sister at the sister’s wedding rehearsal dinner. Jane is sick of selflessly sacrificing for her sister and is furious about her dubious romance with the boss. Jane exposes her sister’s lies while the guests are stunned into awkward silence.

Jane took too much responsibility for her little sister and others, sacrificing her own happiness to make up for the death of their mother. To some degree she felt trapped in this role, even though the trap was one of her own making. She resented her role and needed it at the same time. She put aside her own needs and wants for years and she was finally DONE!

Anger is a common part of the codependent’s emotional landscape. In another article I defined codependency as a constellation of thoughts, emotions, and behaviors that profoundly affect the way the codependent person relates to others. People who are codependent define themselves and gain or lose their self-esteem based on the reaction and behavior of people with whom they are in relationship.

Codependents get their sense of worth and identity by rescuing and fixing others.  Maybe we had to take care of an alcoholic father or cover for an out-of-control sibling. Maybe we saw endless self-sacrifice modeled by a parent or were told it was our godly duty to put everyone first.

Codependents have trouble setting limits and saying no. We feel depressed, anxious, alone, hurt, and misunderstood. Often, buried under all of that is smoldering anger.

Giving Till It Hurts

We give and give to the point of hurting ourselves. We become overly involved. We NEED others to be happy to feel good about ourselves. When they don’t appreciate our efforts, we feel hurt and angry.

The very people we are trying to help won’t take our valuable suggestions, they won’t change, and we resent it! “Why won’t you listen?!” We can’t solve their problems and we feel inadequate.

“Why isn’t anyone else helping? Don’t they care?”

And when others DO offer to help, in spite of our fury and fatigue, we resist. “I have to be strong! It’s all up to me!” We feel guilty for taking time for ourselves and may even fear the loss of our unique role as rescuer. And woe to the person who suggests we delegate! ”What?! Am I not doing a good enough job?!”

Nice to a Fault

Many of us learned that to be “nice” was good and to be angry was bad. Somewhere we picked up the idea that people would leave us if we were honest about our feelings, needs, and wants.

Women often find it difficult to be honest about anger. “I’m fine. No, I’m not mad you forgot.” “No, I don’t mind working the shift for you even though I’m exhausted.” “Ok. I’ll make time for another committee.” “Sure, that’s ok. I can have 5 dozen cupcakes ready by tomorrow.” We want to scream, but instead we smile.

No Time for Me

We get so wrapped up in caring for everyone else in our life that we fail to take care of ourselves. We run out of time to exercise. We grab junk food on the fly. We can’t afford the time or money for therapy. We forget to take our medicine or go in for check-ups. “Pleeaase, are you kidding?! I don’t have time for that!”

We don’t want to appear selfish or lazy. We are responsible, thoughtful people. And so we stuff our feelings deep down, deny our resentment, and soldier on. But the anger doesn’t disappear. It just gets buried, until one day, like Jane, we just can’t take it anymore! Anger can work its way to the surface through inappropriate blow ups or passive aggressive behavior. Equally concerning is anger that implodes, turning inward and making us sick.

Be angry and do not sin; do not let the sun go down on your anger.

First, it isn’t necessarily a sin to get angry. Anger is a normal human emotion which can give us important clues about what is wrong and where our boundaries are being violated.

Second, there is a right and a wrong way to handle our anger. Ephesians 4:15 talks about “speaking the truth in love.” We say what we mean, but say it in such a way that we don’t tear others down. Of course, it goes without saying that punching a hole in the wall probably isn’t a good way to handle anger, but neither is stuffing it!

Finally, we should deal with our anger quickly, rather than let it smolder over months and years.

Telling the truth, handling our anger in responsible and assertive ways, is an act of courage. We want to be loved and accepted. Standing up for ourselves is a risk; we can’t be sure how others will respond. But their response isn’t our responsibility. Handling our anger appropriately is.