This post was originally posted on our coaching website.  Failing and fear of failure have been such a prevalent issue still of late that I was looking at past posts to send to clients.  I read this one again and it was an inspiration to me.  I couldn’t write a better new post if I tried.  So I hope you enjoy this one from 2013. 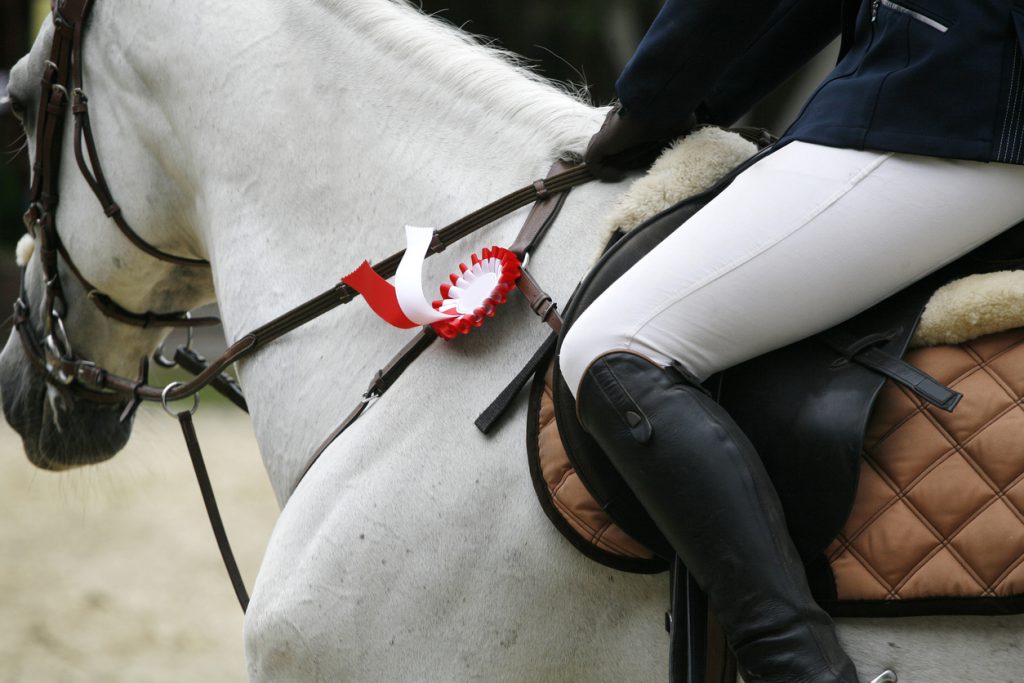 How To Stop Failure

I hate to fail.  Everyone does.  And we have all read that you need to be comfortable with failure, because if you aren’t failing you aren’t stepping out enough.

I am easily inspired to step out on that light and wobbly limb.  The problem comes when it starts to bend with my weight I leap safely back to solid ground.

It looks different in the varied areas of a life, but it feels the same.  I hate that feeling of embarrassment and shame.  I don’t want to acknowledge what failed to others.  Their encouragement feels like pity, stretching the wound further.

The Absence of Failure Is Not Always Success

Over the years I have learned a lot.  I have learned how not to fail, but it usually is preceded by avoidance.  The absence of failure is most definitely not always success.  It could be nothingness.  Just don’t try and you escape the doom of failure.

Mostly the avoidance of failure leads to a life un-lived.  God created us each with an abundance of gifts and talents.  We are all unique and He has plans to use what He created in us.  If we are willing.

He gave us that whole free will thing and then allowed Satan in the world to mess with our heads and convince us not to try.  He tells us God is setting us up for failure, but that isn’t in God’s nature.  We may fail, but if we trust God He will use that for good too.

That is where the whole character building thing comes in.

From Spectator to Competitor 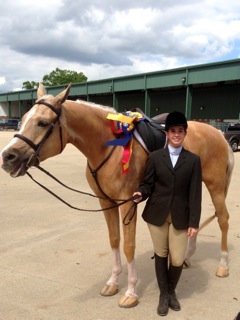 My daughter started riding horses when she was like 8 or 9.  Passion doesn’t quite describe my daughter’s feeling about horses.  True love is a better description as pain, and joy, are so tightly interweaved in her daily emotional rides with her horse.

In order to participate fully in an area where our investment fell short, my daughter made herself useful.  She traded her labor for her love.  By working the horses and helping the other riders she earned her place on the backs of many horses worthy of her love.
She is 17 years old, the last year you are able to participate in junior nationals.  She has gone to Nationals the last two years to help.  To help others live her dream.  To be close to her love.

This year being her last, the owner of Goldrush, the golden boy with the flowing tail, offered for Katie to lease him.  To go from a spectator to a participant.  Goldrush beautiful, and untamed.  Labeled as obstinate, his owner gave up on him. Yet when she saw Katie ride, she saw her love transform his potential.

And so the year began last summer.

Nationals is this summer.

This past weekend, horse and rider entered the Magnolia Classic Horse Show.  It was a weekend that illustrated love over passion.  Katie entered class after class and the results each time were the same.  She and he, the pair, would come towards the end of the pack.  Mistakes identified.  Strategies changed.  New effort applied.  The same results.

My untrained eye couldn’t detect the flaw in her ride.  To me I couldn’t understand at times why she was at the end, rather than on top of the judges list.

It was heartbreaking to me, yet Katie continued to hold her head high.

One of the judges kept talking to her each round.  He didn’t talk to the other, rider or horse in class after class.  But in between, Katie and Goldrush, would enter the arena with heads held high.  I would hold my breath the moment she entered.  And at the end of each class she would depart head still high without the bright blue and red ribbon.

I noticed the photographer always nearby.  A hand outstretched to gently rub Goldrush’s head.  A smile and attention to my daughter, left out of the attention of the crowd.

After the last class, another loss, and the finality of failure looming, we went to hug Katie with plans to escape the stress.  When we approached with our goodbyes, she said “Wait I signed up for one last class.  There is an open championship class.  It will be in about another hour.”

I have to tell you that my first thought was “Oh no, I can’t bear it any more.”  But, she still had the determined look in her eye.  She said she was going to rest, her and he, and get ready for the last round.

I watched.  I held my breath.  Goldrush didn’t break stride or drop out of his cantor.  It looked perfect to me, but my eyes had been blind before.

The judge was talking to her again.

The photographer was aimed her way silently in the back ground.

The shrill pitch of the microphone came alive, and in a split moment, announced Katie and Goldrush, the perfect couple and grand champion winners by both judges. My heart caught, unsure of what I had just heard.  Katie’s head drops down, the first time yet, in what seemed defeat.  But when she raised her head, she took a deep breath, and smiled broadly as they pinned the prized blue and red ribbons to her.  Flowing, as she humbly took her victory lap, the ribbons followed her out.

She told me when I found her that the judge, who had encouraged her along the way, said this time, her 7th time of the show, was her time.  He didn’t see a single mistake.

A Sweet Reward For Perseverance

Later that evening on Facebook, the trainer sent us a picture of the show photographer’s page.  A picture of Katie and Goldrush at the top of her page.  Out of the hundreds of riders and horses, it was Katie on her page with this caption. 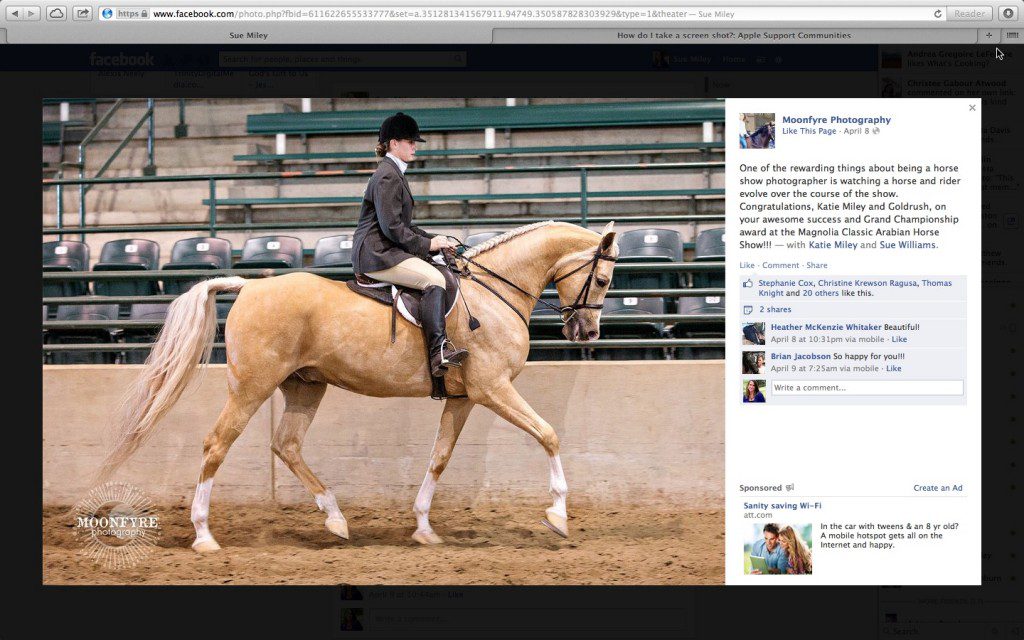 “One of the rewarding things about being a horse show photographer is watching a horse and rider evolve over the course of the show. Congratulations, Katie Miley and Goldrush, on your awesome success and Grand Championship award at the Magnolia Classic Arabian Horse Show!!!”

We all know the stories of perseverance and working hard at what is important to you.  And I believe in glorifying God by always trying our best.

Ribbon or no ribbon, I learned something new about failure that day, from my daughter and a horse.

Failure Is A Worldly Term – Another of Satan’s Lies

I learned that failure is a creation of Satan, not of God.  It is Satan’s goal to distract us from the prize.  To put disappointment and shame in the mix to stop our efforts.

If we keep working.  If we keep believing.  If giving up is worse that failing.  If our love is deeper than our shame.

Failure is a worldly term, that bears the weight of every negative emotion combined, to create paralysis in it’s prey.

In eternity, God is waiting, and there is not only one grand championship ribbon.

We can all have one.

We just have to believe.