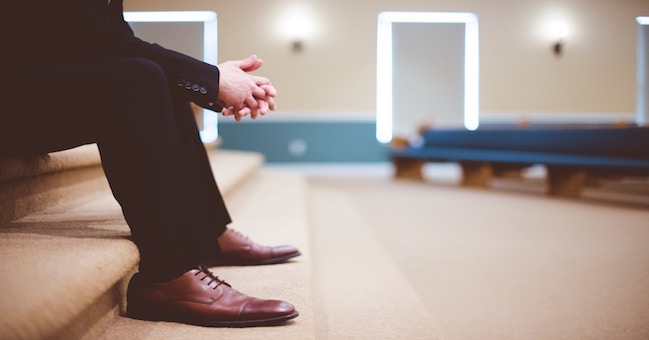 Who is God, and what can we expect of him in times of crisis? Our answer depends on how we answer these three questions:

This is especially true when our prayers seem to fall on deaf ears, and nothing turns out the way we hoped or expected.

But there’s a problem. Our conclusions about God are often tangled up in our projections. He becomes a blank slate that we fill in with our worldview.

I think it was Anne Lamott who said, “You know you’ve made God in your own image when he hates all the same people you do.” Funny. But it illustrates the point that we tend to project onto God our moods, our experiences, and the popular opinions of our day, or at least our inner circle.

Ah, you say, but that is why the Holy Scripture must be our standard. Fair enough. But good Christian men and women have read the same passages through the centuries and drawn vastly different conclusions, in part because we interpret things through the lens of our upbringing and the prevailing worldview.

Case-in-point: A few years back I was touring a 14thcentury cathedral in Utrecht, Holland. The guide led us to a small alcove at the side of the sanctuary and pointed to a place on the wall were a fresco, a watercolor painting created on wet plaster, had been removed. Someone noticed a hollow sound behind the painting and their curiosity was piqued. Once the fresco was removed, they found a colorful bas-relief, a three-dimensional plaque, of Joseph, Mary, and baby Jesus. Their noses had been chiseled off. You see, a few centuries earlier, during a period called the iconoclast, good Christian people thought they were honoring God by vandalizing churches and destroying what they believed were idols. These people were confident God would be pleased. Their view of God and the application of scripture was based on popular opinion.

More recently, I heard a hilarious but painful story some friends told about how when they became Christians in their early 20s, they felt compelled to destroy their vast collection of classic rock-and-roll LPs. Let’s just say they’ve lived to regret it! No doubt we could spend hours and hours talking about all the things done in history, or even in our own personal histories, in the name of God, that make no sense now.

Our Experiences and Perceptions of God

I don’t want to engage in a debate on Biblical hermeneutics and how we should interpret scripture. What I would like is for us to consider that our experiences, both personal and cultural, color our view of things, even the way we experience God. Often, we unconsciously attribute to God the good or bad qualities we find in ourselves or experienced with early authority figures.

A person raised by parents who were fair but firm in their expectations, consistent, supportive, and who provided unconditional love, will likely experience God that same way.  It will be easier for him to believe that God is good and trustworthy. He will see himself and others as worthy of love and support. It will seem natural to reach out to God when he finds himself in crisis.

If, however, he was raised in a home with parents who were abusive or even just harsh, withholding love and affirmation, he will likely to struggle with the idea that God is good and that he is deeply loved. It doesn’t matter that scripture says so (see John 3:16-17, Romans 5:8, Galatians 2:20, and Ephesians 2:4-5), he will still find it hard to live in this truth.

If his parents were inconsistent, one minute attentive and affirming, the next minute blindsiding him with frightening rage, this will also color his view of God. A person who spent his childhood walking on eggshells, watching for signs of his parents’ impending meltdowns, and not fully trusting moments of warm connection, will likely develop a style of hypervigilance and anxious ambivalence. People can’t be trusted. Consequently, God doesn’t feel trustworthy, no matter what the pastor says (see Psalms 86:15, Romans 3:3).

If the parents were absent, or emotionally unavailable, perhaps due to depression, illness, workaholism, or the parents’ own unresolved issues, the child likely felt invisible. As an adult, this person will struggle with self-worth and connection because the message he absorbed was, I don’t matter, I shouldn’t trouble others with my needs or concerns. And that belief will spill over into his view of God. Is he really going to be there for me? Should I even bother him with my issues? (See Zephaniah 3:17.)

Children lay down a variety of beliefs about life, themselves, and others in their early years, before they even have language to articulate those beliefs, based on the emotional resonance they have with their primary caregivers. Those beliefs will have a profound effect on their future view of themselves, others, and God. Some of the healing work of therapy is repairing those attachment wounds.

Do you call out to God but feel like your prayers fall on indifferent, deaf ears? Is it hard to be honest and vulnerable with Him? Do you doubt that He cares deeply about you? Are you perhaps confusing Him with your projections? Is it possible that God isn’t who you think he is?

God’s unfailing love for us is an objective fact affirmed over and over in the Scriptures. It is true whether we believe it or not. Our doubts do not destroy God’s love, nor does our faith create it. It originates in the very nature of God, who is love, and it flows to us through our union with His beloved Son. ~ Jerry Bridges