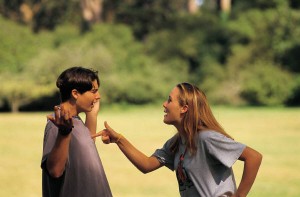 I don’t know about you, but I missed this one in the course catalogue! In my opinion, this ought to be a core requirement. Conflict affects us all and some of us are bad at it! Usually what we do is just repeat what was modeled for us by our parents and family. If we were fortunate enough to have emotionally mature parents who modeled healthy behavior, we have an advantage. For the rest of us, I am going to offer the class syllabus.

Conflict: An Inevitable Part of Life

No one likes it but conflict in an inevitable part of life. Some of us maneuver through life avoiding conflict while others seem too eager to engage in a fight. The ultimate goal of an argument is to do 3 things: 1-express or get what you want/need, 2- without ruining the relationship, or 3- losing your self-respect. Sometimes it isn’t possible to get all three despite your best efforts. It also isn’t uncommon to find people so determined to get what they want that they run rough-shod over relationships. They win the battle but at tremendous cost. Others are so careful to protect the relationship or so afraid of conflict they won’t stand up for what they need or want. None of these are good long-term approaches.

Conflict can be healthy or unhealthy depending upon how it is handled. John Gottman, Ph.D., is one of the founders of the Gottman Institute in Seattle. He has studied more than 3000 couples in his laboratory, measuring physiological sign of stress while they argue.  His conclusion is that the number of arguments a couple has don’t affect the health of the relationship. What does damage, however, is the way couples argue and fight. He describes four things that are incredibly damaging: criticism of another’s character or personal attacks, giving the silent treatment, defensiveness, and contempt.

Dr. Gottman can predict how a conversation or argument will end with 96% accuracy. He observed the way conflict begins is how it will end the vast majority of the time. A gentle, soft start up is a powerful way to have a productive conversation that doesn’t damage the relationship. This isn’t really a new concept. Scripture teaches this. A soft answer turns away wrath, but a harsh word stirs up anger. Proverbs 15:1. Now we just have research to back it up!

Gottman also found that when people are “flooded” with stress from an argument—measured by increased heart rate, sweaty palms, etc. –they cannot think clearly and productively discuss the issue. Stress hormones make it hard to be attentive, use higher level reasoning, and control our impulses. We are more likely to say or do something inappropriate or unhelpful when we are physiologically overwhelmed.

Healthy couples do something he calls “repair attempts”. These lower the tension between the couple and make a productive conversation possible. A repair attempt can be anything from a well-timed joke (careful with this one!), a touch, a time-out, etc.

We are often eager to defend ourselves. Sometimes this is because we feel that if we admit we are wrong, it’s like admitting we are bad or weak. But sometimes it is because we feel falsely accused and badgered. It is more effective to first listen and communicate to the other party that we have heard their concerns. Remember acknowledging another point of view or validating another’s feelings is not the same as agreeing or approving. Sometime just knowing we’ve been heard can lower the anger and frustration. This usually makes the other person more likely to listen to you.