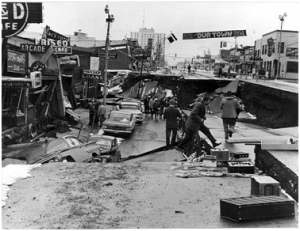 Some memories are vividly and forever seared in our minds. I was  young child when, on Good Friday, 1964, the Great Alaskan Earthquake hit. 9.2 on the Richter scale, the quake was the second strongest in recorded history. I remember being in the basement of our home with my sisters when the rumbling and shaking began. The floor shifted so powerfully any attempts to stand were futile. My mother, helpless to reach us, huddled upstairs in the corner with my brother, hoping the frame of the house would offer some protection.  Terrified the house would collapse on us, Mom shouted instructions for us to crawl to the stairs. The house snapped back and forth so violently, my sister thought it was being whipped about by the wind. To me, it felt as if a giant’s fisted hand was shaking a toy for what seemed like an eternity. For three minutes, complete and terrifying chaos reigned. Nothing was solid, nothing was secure.

When the ground was finally still, shattered china, broken sidewalks, and fearful questions remained. Where was my father? Was he alive? The phone lines were dead, the power was gone. I studied my mother, trying to gauge my own reaction, and watched this otherwise powerful and confident woman seem helpless and overwhelmed.

The details of the following weeks are lost to me, but I remember many families had it worse than us; some lost homes, others lost loved ones. Entire sections of Anchorage dropped by 8 feet, other areas outside the city were raised by 30 feet. Highways, torn into pieces, hampered rescue efforts. Villages in coastal areas were devastated by post-quake tsunamis. When it was finally done, Alaskans, forever changed by the events of that Friday, were left to pick up the pieces of their lives and find a new normal.

Life, with its bending and shifting, can feel like that “megathrust” earthquake. One morning things are “normal”, and then something happens, sometimes in as little as three minutes, and life will never be the same. Maybe we hear the diagnosis of cancer. Or perhaps we discover a partner’s betrayal. Or we get the dreaded phone call to tell us there’s been an accident. Or maybe it is part of the seasonal shifts that we didn’t expect would come so soon. Why is our pastor leaving? Where did the time go? My parents weren’t supposed to get old! How did my children grow up so quickly?!

The transition between life-as-it-was and life-as-it-will-be can often feel as if we have nothing solid to hang on to. It is in our nature as humans to cling to what is known and familiar. It can be terrifying for many of us to stare into a blank future. We’re not sure what to expect and we’re not sure we will be able to handle what is expected of us.

Leaving the Familiar Behind

As you may recall, the ancient Hebrews found themselves in Egypt after Jacob, at Joseph’s invitation, moved his tribe there to save them from famine. At first things seemed to be going well, but over time the goodwill of the Egyptian royal family evaporated. The Hebrews, reduced to slaves, didn’t have much of a life in Egypt, but at least it was solid and familiar.

God had other plans and so he sent the plagues to motivate Pharaoh to let the Hebrews go. It’s easy to read about them as if it was an Arabian Nights tale. Interesting. Curious. But going through them must have been terrifying. Strange and terrible things were happening; water turning to blood, frogs, gnats, flies, dying livestock, boils, hail, locust, darkness, and finally death. God got Pharaoh’s attention and life as the Hebrews knew it was coming to an end. Nothing would ever be the same.

At first their escape into the desert, under Moses’ guidance, was embraced with enthusiasm. Freedom! But soon enough the adrenaline wore off and the realities of their new life hit them. The Hebrews longed for the comforts of the familiar. I can imagine they were panicked at times, wondering if they could really survive in the wilderness, and so weary of the monotonous journey that seemed to take them nowhere.

It’s easy to judge their frequent kvetching.  I don’t know if I would have done any better. Months and years looping around the desert and no end in sight! The Promised Land was a vision, a theory, not a reality. They were waiting and waiting for something to break loose, for God to deliver on his promise. They left behind life-as-it-was and had yet to begin life-as-it-would-be.

God lost patience with them. His people forgot their history. They forgot how God had provided for them. They didn’t trust him. It felt like they had been waiting and suffering for forever. Where was God?

The in-between, the transition phase, is the hardest part; leaving life-as-it-was and waiting for life-as-it-will-be. During these times we are left to ponder. Why did things happen the way they did? Why did God allow this? Does he see me? Does he care?

We used to sing a simple song in my childhood church. After someone shared a particularly painful prayer request, it wasn’t uncommon for the Eskimo members of the congregation to spontaneously break into this chorus:

During transitions, when life-as-it-was is coming to an end and while you are waiting for life-as-it-will-be, lean into your faith. God is there; he is trustworthy and good. Remember your history. God was with you in the past and he will walk you into the future. Faith is the thing that holds us when the ground underneath us is shifting. In times like these, be sure your anchor holds. 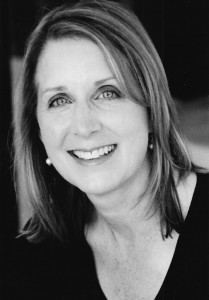 I am a Licensed Professional Counselor, a nationally certified counselor, and a registered nurse with several years experience helping people with healthy, successful living.